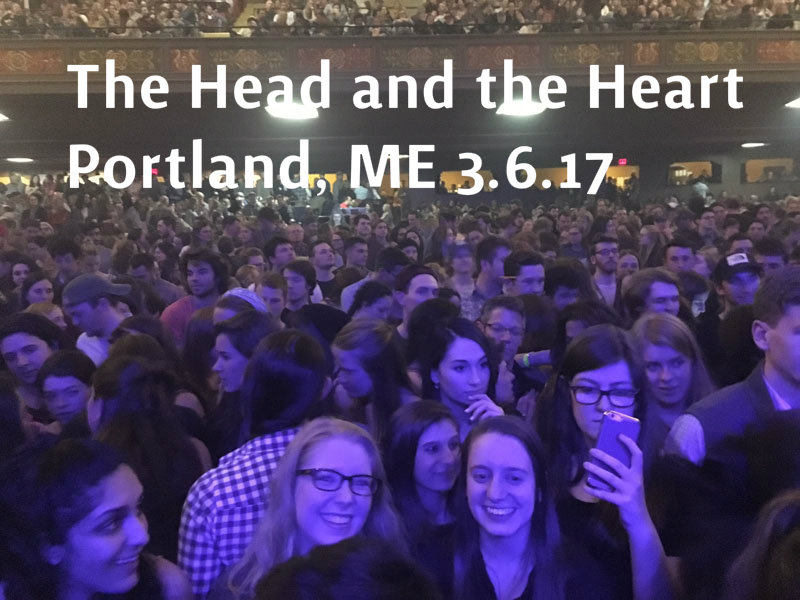 You would have never known it was a Monday night by the enthusiasm and energy of the sold-out crowd at The State Theatre. The vibe started strong with outstanding opener Springtime Carnivore and stayed that way all night long with Seattle’s much-adored indie-folk band The Head and the Heart.

It had been a couple of years since The Head and the Heart last played here and we welcomed them back with arms open wider than Steve Perry’s.

This was the second leg of the tour for their third album, “Signs of Light” which was released last fall.  “Signs of Light,” by the way, is their first album on Warner Bros. Nice!  The two that came before it are “Let’s Be Still” (2013) and their 2011 self-titled debut. Quick sidebar, “Lost in My Mind” from that first record is truly one of my favorite songs of the past several years. Right?

God I love that song. Now where was I? Ah yes, The State Theatre in Portland, Maine on Monday night, March 6. 2017.

So who’s in the band?
The Head and the Heart is Jonathan Russell (vocals, guitar), Charity Rose Thielen (violin, vocals), Chris Zasche (bass), Kenny Hensley (piano), Tyler Williams (drums) and Matt Gervais (guitar). If you’re a fan of the band than you already know that Gervais, married to Thielen, is filling in for Josiah Johnson who’s on hiatus from the band as he is in treatment for drug addiction. Suffice to say, all the love to Johnson.

Stage Notes
I don’t always mention the stage when writing reviews but I will for this one because it was simple yet classy, adorned with several large plants (possibly fake but that’s OK) and several white hanging globe lights along with some basketball sized orange ones around the stage. Kind of Pier One Importey, and I mean that in a good way. There was also a big disco ball above the stage that did its job in casting white spots  of light around the theatre in a way that wasn’t overbearing. I also totally dug the white neon “Signs of Light” sign hanging behind them.

The Show
The Head and the Heart played for an hour and a half, including encores and the show included songs from all three albums, many of which the very happy crowd was none too shy about singing along with. They opened with “All We Ever Knew” from the latest record and in no uncertain terms, it’s a damn fine tune.   Harmonies for days.

This went right into another new one, “City of Angels,” driven by piano and guitar. Breezy song, entirely enjoyable live. The rest of show was, understandably so,  heavy with “Signs of Light” tunes including “”Take a Walk,” and “I Don’t Mind.”

We got to hear Thielen sing lead a few times which was lovely as was her violin. As for the rest of the band, they were completely on-point. They’ve been at this for a while and it showed. There wasn’t  much in the way of spontaneity but otherwise, they sounded as good as a band can sound in a theater with very old bones but a heart of gold.

As for my favorite “Signs of Light” song, that came during the encore with the gorgeous tune “Library Magic.”  The song is dreamy and full of magical lyrics like this:

The Head and the Heart ended the night with “Rivers and Roads” from their first record and we filed out of the theatre listening to Dolly Parton’s “I Will Always Love You,” which reminds me, the band took the stage to David Bowie’s “Let’s Dance.” Five bonus points awarded for that.

I don’t have any honest-to-god criticism for the band or the show other than to say, and this could be from being on the road for so long- there wasn’t much in the way of audience engagement other than the obligatory telling us about the fabulous lobster rolls they had from Eventide.

But what I will say is that I looked around a lot during this show and people were INTO IT. Lots of smiling faces, singing along and roof-rattling applause and cheering. This is because The Head and the Heart write damn good songs and sing and play them incredibly well.

3 thoughts on “The Head and the Heart dazzle Maine audience”