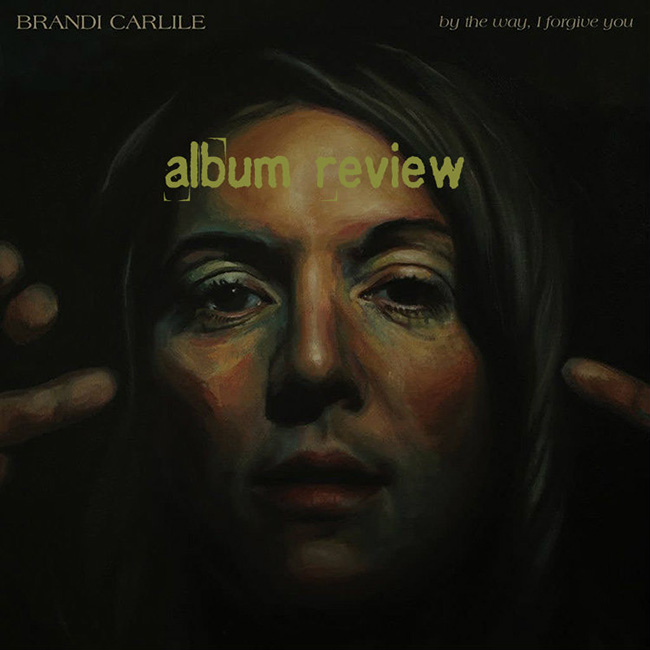 I’ve been trying to write this Brandi Carlile album review for a few weeks now and I’m still struggling with what exactly I want to say. The album  (produced by Dave Cobb and Shooter Jennings) has such an emotional hold on me that I’m a bit of a mess.  I wasn’t sure if I could string my thoughts together enough to even attempt a review. Then it came to me; Conventional album review wisdom (if it even exists) be damned! This is what I’m going to do instead:

AN OPEN LETTER TO BRANDI CARLILE & ‘BY THE WAY, I FORGIVE YOU”

Dear Brandi Carlile and your album “By The Way, I Forgive You,”

Holy hell, what have you done?

You and the Twins and everyone else involved have made an album that is nothing less than brilliant.

I can’t imagine what it’s going to be like hearing these songs live in the coming months.

ONE: “Every Time I Hear That Song.” I don’t keep a journal. I wish I could. But I don’t because I’m too afraid of it being read by anyone. And I’m too afraid, I’ve realized, of documenting my deepest secrets.  This is one of the reasons why music is so important to me. Certain songs I adopt as journal entries and no matter how much time has passed, every time I hear that  a certain song, there’s an emotional charge. This makes “Every Time I Hear That Song” something of a song within a song. This song gives me permission to revisit past experiences, past relationships, past moments of connection, past pain, sorrow and all the rest of it. And you’ve packaged this all in a gorgeous song. And when you and Tim and Phil sing the lines “By The Way, I Forgive You/I never will forget you for giving me what I found/Without you around I’ve been doing just fine/’Cept for anytime I hear that song,” it’s profound. And speaking of forgiveness, you’ve asked us to look at forgiveness under a microscope. Goddamn it. I have found myself budging on things I never thought I’d budge on. I have found myself slowly starting to forgive myself for past mistakes. You have made a song into something of a movement. And you’ve asked your fans to document moments of forgiveness with a contest you ran and I saw some of the entries and people are baring their souls and it’s beautiful. Dear Brandi and ‘By the Way, I Forgive You,” this song is everything. It really is.

When this single was dropped last fall I, like many other people, fell outta my chair. The song is HUGE and lush with strings and crescendos and Mount Everest vocals. I’ve been swooning over this song for a while now. But I’m going to share with you part of a Facebook post (with permission) by a friend of my named Ryan. He’s a new fan and this is what he posted the other day: “Sorry everybody, it’s another Brandi Carlile post. I can’t tell you how rapt I am with her. As I previously offered, I am glad I don’t have a song on the radio right now because it would sound foolish if it came on after “The Joke”. We’re all playing checkers. She’s playing chess. I haven’t liked music this much in years.” Then a few days later Ryan shared this: “As we’ve covered here previously, I recently was floored by hearing the new Brandi Carlile single on WCLZ. I finally found some solely listen- to-music time tonight, and am just now listening the whole record. This is a jaw dropping startlingly gorgeous and extremely visceral piece of art. It is astonishingly beautiful. Anyone who is not listening to her has got to stop and take a look at least. I am so mad at myself for having never given her time these past few years. This is my favorite record of the year so far, by miles.” Ryan’s discovery of Carlile reminded me of the scene at the end of “Field of Dreams” when Kevin Costner’s brother-in-law could finally see the ballplayers and was floored by it. Welcome, Ryan, to the party. Here, have a Jameson’s.

THREE: “Hold Out Your Hand”

This is is a barn burnin’ foot stompin’ feel good tune, complete with a sonic boom of a chorus. It’s an outlaw’s anthem and a redemptive, devil defying proclamation of faith all wrapped up into one gigantic song that makes me want to both dance around in a cowboy hat and go running up the stairs of the nearest church. And yet Carlile also slips in some not foolin’ around lyrics in the form of “Here is a license for killing your own native son/For a careless mistake and a fake plastic gun?”

I’ve been hearing  this one live for at least a year (maybe two) and am so glad it landed on the album. “Evangeline” is the name of Carlile and her wife Catherine’s three-year-old daughter. The song is one that mothers – and parents- will surely identify with. And for non-moms like me , it let me into a world I know I’ll never fully understand. And Carlile does  so in such a sweet, playful,  gentle and wise way.  “She’s fair and she is quiet, Lord, she doesn’t look like me/She made me love the morning, she’s a holiday at sea/The New York streets are busy as they always used to be/But I am the mother of Evangeline.”  I haven’t heard such a wonderful snapshot of parenthood since Bowie’s “Kooks.”

FIVE: “Whatever You Do”

This song’s first line is everything. “If I don’t owe you a favor, you don’t know me.” God I love that.  That said, this is among the most heavyhearted songs on the album. “There’s a road left behind me that I’d rather not speak of/And a hard one ahead of me, too/I love you, whatever you do/But I’ve got a life to live too.”  The only things that allows me to hold it together listening to it is how resplendent the song is. The strings come in slowly then build and then Carlile’s voice floats up to the sky like a soul escaping a body it no longer needs.

If I’m Dolly Parton , I’m putting a version of this on my next album. Call me crazy but I can hear her singing this one  in my head. And that, my friends, is very much meant as a compliment.  The song seems to be about second chances. And maybe third of fourth ones too.

Not since K’s Choice  released the song “Not An Addict” more than 20 years ago has a song about addiction hit me so hard.  The addiction struggle is sadly very real everywhere, even here in  Maine. Carlile has painted a portrait of it that explains the disease in an understandable way and with empathy rather than judgment. “He wanted to be a better man/But life kicked him down like an old tin can/He would give you the shirt on his back/If not for a sugartooth.”

EIGHT: “Most Of All”

If you’ve ever lost anyone important to you, this song is going to make you cry.  “Most Of All” is heart-rending but it’s also bursting with love and hope and gratitude. It’s also full of kind-hearted inspiration.  “But most of all/She taught me how to fight/How to move across the line between the wrong and the right.”  Prepare to feel all the proverbial things with this one. But don’t you love songs that do that? I sure do.

This is a  knee slapping gem of a song that had me at the first line because it’s so true! “I love the songs I hated when I was young/Because they take me back where I come .” Word, Brandi, word. The song is upbeat and snappy but with brooding lyrics; a perfect combination in my book. Plus the electric guitar and wailing vocals toward the end are motherfuckin’ spectacular.

This was the only song the album could have ended with and it is a reminder that the best way to listen to an album is all the way through, in the order in which they were intended to be heard. In other words, this is not an album to be listened to on shuffle play. Trust me on this. “Party Of One” is one of the saddest Carlile songs I’ve ever heard but it’s also stop-you-in-your-tracks stunning. At just under six minutes, it opens with a piano that sounds like its weeping. “Waiter send this to the table, the party of one/The only other lonely soul in this place” are the opening lines. From there the song speaks of love at first sight and a love that is without end. But also of a defeated love. It doesn’t matter what is happening in your life, this song’s gonna kill you. And just when you think you’re going to survive the song, in come the strings and then the drums and you’re swept up in a whole other layer of emotion. This song is a self-contained symphony of feelings, a relief map of longing and a timeline of a love that despite all the bullshit, won’t ever really be extinguished. Amen.

The holy trinity of Brandi Carlile, Tim Hanseroth and Phil Hanseroth have collectively written ten songs that are going to touch a TON of people both as they listen to them and see and hear them performed live.  “By The Way, I Forgive You” has touched me in a way I didn’t know an album could. I didn’t know  I could love a Carlile album as much as “The Story” but upon hearing this one, the code was cracked and another compartment of my heart was accessed.

P.S. I’ve had the pleasure of interviewing Carlile on three occasions for the Portland Press Herald/MaineTodaycom. 2012  , 2015 and 2018.

8 thoughts on “REVIEW: Brandi Carlile’s “By The Way, I Forgive You””