Ah yes, The Psychedelic Furs. My love for them dates back to the 80s and centers around their first four, magnificent, albums. 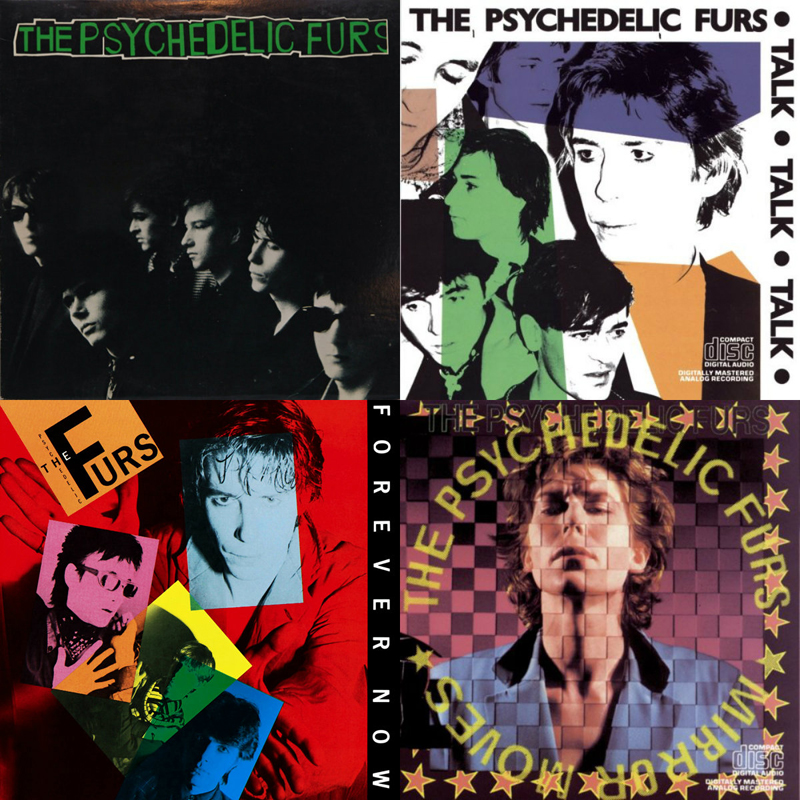 These four albums are still perfect and songs like “Sister Europe,” “Imitation of Christ,” “India,” “Mr. Jones,” “Dumb Waiters,” “She is Mine,” “Into You Like a Train,” “All of This and Nothing,” “President Gas,” Love My Way, ” “Sleep Comes Down,” “No Easy Street,” “The Ghost in You,” “Heaven,” “Here Comes Cowboys,” “My Time” and “Highwire Days” (among others) still kill me.  They released three other albums after these; “Midnight to Midnight” in 1987, “Book of Days” in 1989″ and “World Outside” in 1991 but I’m less familiar with those save for the singles “Heartbreak Beat,” “Angels Don’t Cry,” “Shine” and “Until She Comes.” I don’t know why I haven’t fully embraced these “later” albums. Perhaps I’ll get there. But the fact remains, those first four are sacred parts of my record collection and they always will be.

As a gal in her 40s, I’m fortunate that I saw the Furs a few times in the 80s and have very fond memories of shows at the Orpheum in Boston as well as the Boston Common and a show at what was then called Great Woods in Mansfield, MA.

But I hadn’t seen them since then. That was until four years ago when , much to my heart attack worthy delight, a tour brought them through Portland (ME). A posse of us old Furs fans went and the show at what was then The Asylum was incredible.

YouTube, you sure do come in handy. Here’s  a clip I just found from that night in Maine of The Furs playing “Highwire Days.”

As you can see and hear, they sounded FANTASTIC. I saw them two more times after that, once more in Portland at Port City Music Hall and then during the summer of 2016 (with The Church no less!) at Hampton Beach Casino Ballroom. And those shows were also stellar.

But there was something extra special about seeing them in Boston, the city I first saw them in when parents had to drive my friends Becky and Sue and I into the city. We all grew up in Andover, MA and I’ll never take it for granted how great it was having easy access to Boston.

This time around I met up with two college friends from Keene State. Nancy, Melissa and I all knew each other because we were all involved in some capacity with our college’s radio station WKNH.

Nancy hadn’t seen the Furs since 1992 and Melissa had never seen them. I was just as excited to reunite with them and share their excitement as I was to experience the show myself. I love that feeling. Don’t you?

So there I was, sitting outside at T’s Pub on Saturday afternoon, the 14th of October waiting for my friends to show up. I happened to choose the seat facing the street and facing the Furs tour bus. Alone, I sat there, looking at my phone as one does, sipping a beer and spacing out when what to my wondering eyes should appear walking by me was none other than Furs lead singer Richard Butler. 40 something me played it cool. 15 year old me called out his name. He was only a few feet away walking by so in an even-toned, casual voice I just said “Richard Butler.” He turned, smiled, waved and said hi and continued on his way. I returned the wave and smile and that was that. It’s a funny thing to have an encounter like this. Through the years I’ve been fortunate as both a fan and as a music journalist to have met  some of my favorite musicians. A few have even become friends. But it’s an entirely other thing to say hello to a singer you’ve been a fan of since high school. I nerded out immediately and shared the news on social media because the day I become too jaded to do just that is a day I don’t want to ever experience.

There was no opening act that night for The Furs and the doors opened at seven with an initial wave of hardcore fans filing in. Nancy, Melissa and I entered about a half hour later or so and found good enough spots in the balcony area. The Paradise is a tricky venue because unless you’re right up front it can be tough to see so the balcony was our best bet.

A round of drinks and much nostalgia later, the clock struck nine and holy shit, I just about shrieked when David Bowie’s “Warzawa” started playing. We heard maybe the first two minutes. David Bowie’s my freaking life and I can’t believe this was their “walk out” song. WELL PLAYED!!! Jesus.

Here’s a clip someone shot of “Warzawa” into “Dumb Waiters”

The Furs established right out of the gate that they are still a fantastic band. Richard Butler’s vocals were sensational, Mars Williams is still an absolutely incredible sax player, Tim Butler still has his bass chops  and the rest of the band  as far as I’m concerned, are absolutely perfect. What’s more, the entire night had Butler jumping around with more energy than I ever hope to have. And the dude’s 61. My theory, he’s a yoga-practicing health nut and is reaping the benefits of a healthy lifestyle but that’s just a guess. Either way, he looked dashing in a tailcoat, black trousers and sunglasses and sang the hell out of an hour and a half worth of classic Furs tunes.

Every single person (about 1,000) of us at that sold-out show felt all the things during “The Ghost In You” and “Love My Way.”  “Heaven” was heavenly, ” “Pretty in Pink” was a nostalgic romp back into the land of John Hughes and Molly Ringwald (though us purists prefer the original version better) and “All That Money Wants” was, well, right on the money.

This brings me to the encore. The Furs could not have chosen two better songs to say goodnight with. Both from their first album, both absolutely divine and such a part of the 80s alternative fabric forever part of my musical DNA.

The first one was “Sister Europe” and then the show ended with “India.”

There was minimal banter between songs throughout the entire concert but it didn’t matter. What mattered is that The Psychedelic Furs were tremendous some 40 years after first forming in 1977. They are not a nostalgia act. They’re too good to be relegated to that pigeonhole. Art rock, post-punk, new wave,  alternative. Whatevs. Call it what you will. I call it glorious and still relevant and as for their Saturday night show in Boston, I loved every single minute of it and so did my friends. I hope the Furs keep right on touring. I’ll be there.