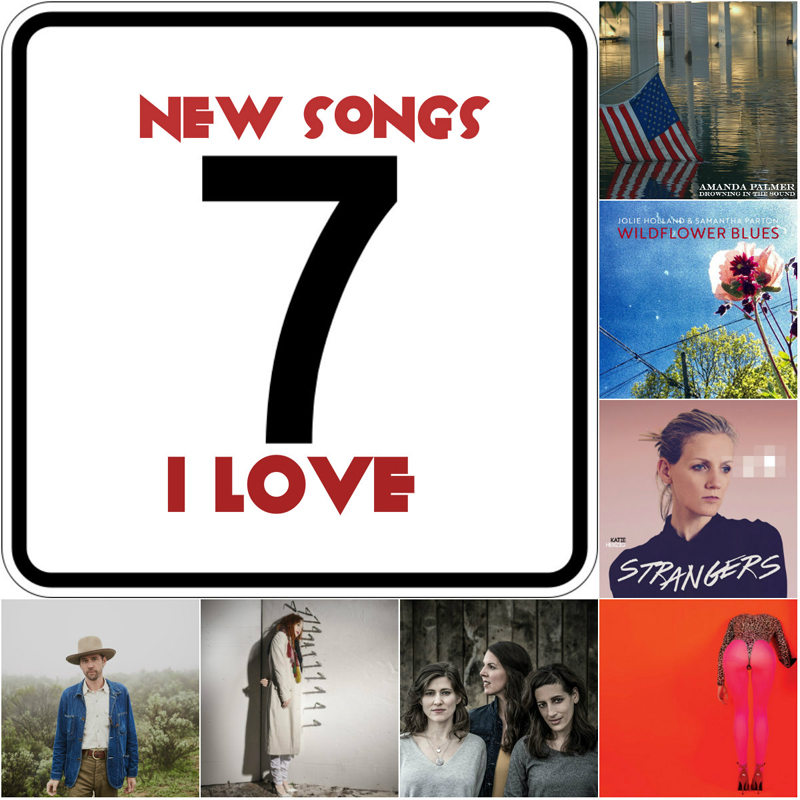 It’s the middle of September and I’m sitting here freakin’ the eff out with excitement over seven spectacular new songs that have come to my attention over the past couple of weeks.

Let’s get right to it. Here are seven songs that I’m super excited about and  that I strongly suggest you listen to. Then, as always, follow these acts on social media,  get on their mailings list, buy their stuff, go see them live, and fall madly in love with them. Ponti out.

Hoorah!! Katie’s got a new album coming out in early 2018 called “Moment of Bliss.” Here’s what she said about “Strangers” in a press release:

‘Strangers’ is one of the first songs I wrote for the new album. Over time I fell in love with the simplicity and chillness of this song and wanted it to be the first on my record. Lyrically it digs into that vague feeling of discontentment that can chase us around in life, even when we have every reason to be content. I think when I wrote this song I was finding my way through that heaviness, but what I loved most about the song is that it felt like it knew how to get to me the other side of it. It gave me comfort over and over again as I worked on it and listen to it now.”

This new song is fantastic!!!

Tori’s latest album “Native Invader” was released on Sept. 8 and I’m working my way through it like a child trying to open Christmas presents with some semblance of self-control. Countdown to her Nov. 2 show in Boston is on. Yes Tori, we will be riding out this storm.

3. “Samson and Delilah” by Willie Watson.

Willie Watson released “Folksinger Vol. 2” on Sept. 15. I had the pleasure of seeing him perform in August at the Rocky Mountain Folks Festival as part of Dave Rawlings Machine and saw him for the first time last year in North Carolina. ”

4. “Drowning in the Sound” by Amanda Palmer

I don’t even know what to say about Amanda Palmer. Since first seeing Dresden Dolls at Space Gallery in Portland, Maine in 2005 I’ve been obsessed.

Here’s the deal with this INCREDIBLE song:

“this song was written as a two-day songwriting exercise on august 29th and 30th, 2017, using input/inspiration/comments from over 600 patrons . it wound up being a response to the insanity of internet politics melded with the recent total eclipse and the devastation of hurricane harvey….and, y’know…other stuff.

10% of the patreon profit, and 100% of the public profits (from iTunes, bandcamp, etc, for the month after release) will go to charity to aid the folks down in texas hit by the hurricane and if you’re feeling moved, please make a donation out of your own pocket.”

Here’s “Drowning in the Sound”

Annie Clark is back! The new album “MASSEDUCTION” is out on Oct. 13. She’s released a ton of HILARIOUS faux interview clips that are giving me anxiety if I, god for bid, ever get to actually interview her.  Take the time to watch them. The first single off of “MASSEDUCTION” is “New York” which is fucking brilliant (disclaimer: I only drop f bombs when absolutely necessary.)  Countdown to her Dec. 1 show in Portland, ME is SO ON.

Now there’s this one, “Los Ageless” HOLY SHIT. I want to do many things at once while listening to this song: Run, clean, dance and basically lose my mind.

6. “Wildflowers” by The Wailin’ Jennys.

They’ve done something sooooo great with an already excellent Tom Petty song. I adore this band so much and was so thrilled that they were part of the Rocky Mountain Folks Festival in August.  Ruth, Heather and Nicky, it’s been a minute since your last album but it’s been SO WORTH THE WAIT. I can’t wait to hear the rest of it, especially Warren Zevon’s “Keep Me In Your Heart for a While.” In fact I might just go ahead and schedule a good cry for the moment I first hear it. The covers album called “Fifteen” is out on Oct. 27.

7. “You Are Not Needed Now” by Jolie Holland and Samatha Parton.

I’ve known about Jolie for years and now am all about Samatha. I can’t wait to listen to the rest of “Wildflower Blues” and instant gratification can be yours, the album’s out now.

Here’s “You Are Not Needed Now”