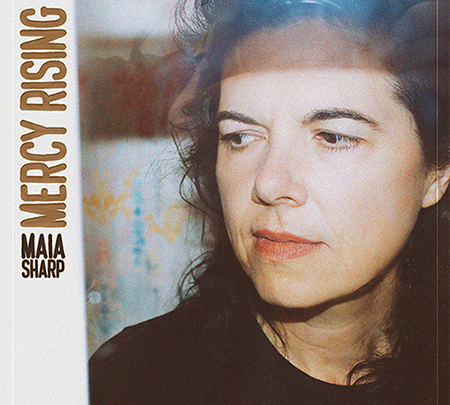 Singer-songwriter and multi-instrumentalist Maia Sharp has just released the best damn album of her career with “Mercy Rising.”

I told her during an interview a couple of weeks ago that I felt weird paying her that compliment because her body of work prior to “Mercy Rising” is tremendous and I’ve been a fan of her music for what feels like forever. Maia, however, appreciated where I was coming from. “It’s the most true to life. It is the most drawn from actual experience and emotion and strife than any of the other ones. Of course everybody says that their latest is their favorite but what makes it a favorite to me is it’s truly confessional. The other ones would have little glimmers of that but this one is all the way.”

ALL THE WAY INDEED.

The first Sharp song I ever knew is “Willing to Burn,” from her self-titled album released in 2002. I just gave it a fresh listen and it holds up nearly two decades later.

Ditto for “Long Way Home,” from that same album. We’ve all been there; on the shit end of a relationship when you realize that it ain’t you babe they’re looking for and you’re reduced to drive-bys as you look for the pieces of your heart along the side of the road.

Fast-forward eight years when Sharp released “Fine Upstanding Citizen” and I finally got to see her live in Portland, Maine. The single “Something Wild,” like “Willing to Burn” is as fresh to me as the day I first heard it as Sharp sings about how the hunt is often better than actually landing your prey and it’s usually better to leave well enough alone, despite how difficult it can be. “You were so beautiful from where I stood/So I chased you down and held you as close as I could/That’s when the fire turned cold/Maybe you’re not supposed to hold something wild.” Vocally, the standout track on the “Fine” album to me is “Kinder Blues,” which I still beg Sharp to play live. She usually does. Because she rules.

In 2015 Sharp released the album “The Dash Between The Dates,” homes to songs like the golden nugget that is “Nothing But the Radio.” Not only that, the album closes with the just-kill-me-now ballad “I Don’t Want Anything to Change” which Sharp penned years ago and was first recorded by none other than Bonnie Raitt on her 2005 album “Souls Alike.” Around that time, Raitt played in Portland (Maine) and Boston with Sharp as the opener and they sang the song together. In fact, another track on that Raitt album called “I Will Not Be Broken” features Sharp’s vocals and it’s one of my personal anthems. Sharp also co-wrote the song “Crooked Crown” on Raitt’s “Souls” album.

It’s my blog so I’ll veer off if I want to. You GOTTA take a minute and watch this clip from 2013 of Bonnie joining Maia and guitarist Linda Taylor on stage for “I Don’t Want Anything to Change.”

There have been other albums and singles so do yourself a favor and go down the Maia Sharp rabbit hole and listen to it all. If nothing else, listen to “Sober” from the 2012 album “Change The Ending.” Trust me. Oh and “Me After You” as well. Yeah. You GOTTA hear that one.

“I think I have my favorites then another slays me. Maia is a master in her absolute prime – out of the ballpark once again, but this one really ignites everything that is different and brilliant about her writing, singing, songwriting and production. I’m running out of superlatives!”.

Sharp has ventured into a whole new galaxy of mood and emotion with “Mercy Rising” and boy oh boy am I here for it.

Sharp moved from her California home of many, many years to Nashville in 2019. I’m not going to unpack her personal life but yeah, some relationship stuff shifted. The good news is she’s settled comfortably into the Music City.

Sharp also had to deal with Covid-19 that hit her soon after a natural disaster hit the state of Tennessee. A tornado touched down and did substantial damage in her Nashville neighborhood in March of 2020, a very short time before the abrupt pandemic lock down.

“One street over houses were complete annihilated. Then for the next six blocks to the north of me it was just random annihilation. So that was very scary but I was very fortunate,” recalled Sharp. In the immediate aftermath lots of benefit shows and hugs happened and although the storm spared her, the virus didn’t and Sharp was knocked sideways by it with the added bonus of pneumonia. Thankfully a handful of local friends she referred to as “porch angels” kept her medicine cabinet and pantry well-stocked as she recovered.

Now where were we?

The title track, “Mercy Rising” opens the album and sets the tone for the rest of it. With stunning strings by Chris Carmichael the song is its own planet of mood.

“I’ve lived a revolution, every season come and gone/I’m looking to the sky/What’s taking so long/I’ve been counting constellations and I’m still waiting on mercy rising.”

Co-written with Sharp’s longtime friend and fellow musician Mindy Smith, it’s as if Sharp has crossed over into a whole other plain of existence as an artist. The song really is that good.

I asked Maia to break it down for me, how she came to the words “mercy rising.”

“I remember stewing for a really long time on that one and just playing through the chord progression with a feeling and a frustration that I wanted to get out about just  feeling stuck and having changed so much about my life but still feeling like this one nagging element and it wasn’t changing. “

“It was like OK I don’t know what to do, something has to change. I’ve changed everything I know how to change. Show me a shift. It  wasn’t a religious thing. It was just like can something it nature just be different? Can that star be over there now? Just show me something changing. ” Sharp said she rambled like a crazy person for a long time before landing on “mercy rising”. “I felt like I needed some mercy from somewhere because I don’t feel like I’m creating it myself.”

I scribbled thoughts down about every track on the album and will share a few of them.

“Missions” is one that Maia wrote herself without any collaborators. It’s “ouch” factor is high in terms of opening a vein of emotion with lines like “I feel more alone than if you hadn’t come/You whisper to thank me for powering through and I hate that I love you this much.” My tones include the words EPIC and WOW and I’m sticking with them.

I noted the slow, moody groove of “Junkyard Dog” and its fantastic refrain. “Junkyard dog at the end of that chain/Junkyard dog howling out in vaine/Fighting for a love you don’t care about/Protecting something you can live without/I thought I was the queen of your castle/Turns out I’m just your junkyard dog.” Speaking of dogs, the track bares its razor sharp teeth and the musicians on it like Will Honaker and Joshua Grange absolutely slay. You even hear Sharp playing her sax on it. Pure fire.

“Not Your Friend” is another exposed heart confessional. “You might say that you never wanna see me again/But I’m not OK hearing about some girl that you might think be the one.” Despite the bitter pills being swallowed, the song is righteous and another feather in the cap of an absolutely spectacular album.

“Whatever We Are,” written by Sharp, Thomas Finchum and Sharp’s Roscoe & Etta musical partner Annu Schulze features Joshua Grange’s stellar guitar and Chris Carmichael’s strings and in the song, Sharp makes her way across the hot coals and into a place of peaceful resignation. Finchum and Schulze’s backing vocals make it all the more poignant.

Could I go on and on and on about the other songs on “Mercy Rising?” OF COURSE I COULD. But I ‘d rather send you off into the world to discover them for yourself and figure out what your favorites are. I really love the hell out of this album and think you will too.

ALSO: Here’s a little Maia Sharp 101 because her career is really quite something and if she’s a new artist to you, you’ll love these fun facts courtesy of a detailed press releases:

“Maia has always managed to play both sides of the songwriting field, writing for notable artists including Bonnie Raitt, The Chicks, Lisa Loeb, Trisha Yearwood, Art Garfunel, Cher, Edwin McCain, Terry Clark and many more while still recording her own albums. Through the years, “I Need this to be Love,” (Hardly Glamour 1997), “Willing to Burn” (Maia Sharp 2002), “Red Dress” (Fine, Upstanding Citizen 2005), “Death By Perfection” (Echo, 2010), “Me After You” (Change the Ending 2012) and “Nothing but the Radio” (The Dash Between the Dates, 2015) have all enjoyed Triple A (AAA) radio success. Her last two releases were with her due Roscoe & Etta (with writing/production partner Anna Schulze) yielding another Triple A favorite “Broken Headlights.”